The chart below shows the total number of security updates issued for Red Hat Enterprise Linux 5 Server as if you installed 5.2, up to and including the 5.3 release, broken down by severity. I've split it into two columns, one for the packages you'd get if you did a default install, and the other if you installed every single package (which is unlikely as it would involve a bit of manual effort to select every one). So, for a given installation, the number of packages and vulnerabilities will probably be somewhere between the two. 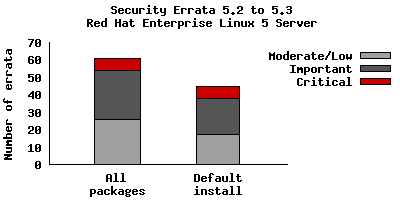 So for a default install, from release of 5.2 up to and including 5.3, we shipped 45 advisories to address 127 vulnerabilities. 7 advisories were rated critical, 21 were important, and the remaining 17 were moderate and low.

For all packages, from release of 5.2 to and including 5.3, we shipped 61 advisories to address 181 vulnerabilities. 7 advisories were rated critical, 28 were important, and the remaining 26 were moderate and low.

The 7 critical advisories were for just 3 different packages:

Although not of critical severity, also of interest during this period were the spoofing attacks on DNS servers. We provided an update to BIND (July) adding source port randomization to help mitigate these attacks.

Updates to correct all of these critical vulnerabilities (as well as migitate the BIND issue) were available via Red Hat Network either the same day, or one calendar day after the issues were public.

In fact for Red Hat Enterprise Linux 5 since release and to date, every critical vulnerability has had an update available to address it available from the Red Hat Network either the same day or the next calendar day after the issue was public.

To compare this with the last updates we need to take into account that the time between each update is different. So looking at a default installation and calculating the number of advisories per month gives the following chart:

Red Hat Enterprise Linux 5 shipped with a number of security technologies designed to make it harder to exploit vulnerabilities and in some cases block exploits for certain flaw types completely. For 5.2 to 5.3 there were two flaws blocked that would otherwise have required updates:

This data is interesting to get a feel for the risk of running Enterprise Linux 5 Server, but isn't really useful for comparisons with other versions, distributions, or operating systems -- for example, a default install of Red Hat Enterprise Linux 4AS did not include Firefox, but 5 Server does. You can use our public security measurement data and tools, and run your own custom metrics for any given Red Hat product, package set, timescales, and severity range of interest.