ZoneMinder is an amazing Linux video camera security and surveillance application I use as part of my home automation system. ZoneMinder prior to version 1.23.3 contains unescaped PHP exec() calls which can allow an authorised remote user the ability to run arbitrary code as the Apache httpd user (CVE-2008-1381)

This is really a moderate severity flaw because you need a remote attacker who has the ability to start/stop/control ZoneMinder, and you really should protect your ZoneMinder installation so you don't allow arbitrary people to control your security system. (Although I think at least one distributor package of ZoneMinder doesn't protect it by default, and you can find a few unprotected ZoneMinder consoles using a web search).

I discovered this because when we went on holiday early in April I forgot to turn down the heating in the house. Our heating system is controlled by computer and you can change the settings locally by talking to a Jabber heating bot (Figure 1). But remotely over the internet it's pretty locked down and the only thing we can access is the installation of ZoneMinder. So without remote shell access, and with an hour to spare at Heathrow waiting for the connecting flight to Phoenix, I figured the easiest way to correct the temperature was to find a security flaw in ZoneMinder and exploit it. The fallback plan was to explain to our house-minder how to change it locally, but that didn't seem as much fun.

So I downloaded ZoneMinder and took a look at the source. ZoneMinder is a mixture of C and PHP, and a few years ago I found a buffer overflow in one of the C CGI scripts, but as I use Red Hat Enterprise Linux exploiting any new buffer overflow with my ZoneMinder compiled as PIE definately wouldn't be feasible with just an hours work. My PHP and Apache were up to date too. So I focussed on the PHP scripts.

A quick grep of the PHP scripts packaged with ZoneMinder found a few cases where the arguments passed to PHP exec() were not escaped. One of them was really straightforward to exploit, and with a carefully crafted URL (and if you have authorization to a ZoneMinder installation) you can run arbitrary shell code as the Apache httpd user. So with the help of an inserted semicolon and one reverse shell I had the ability to remotely turn down the heating, and was happy. 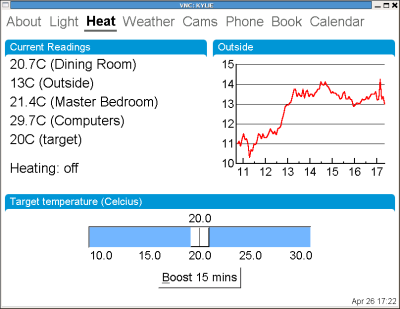 This amuses me greatly for some reason :-)